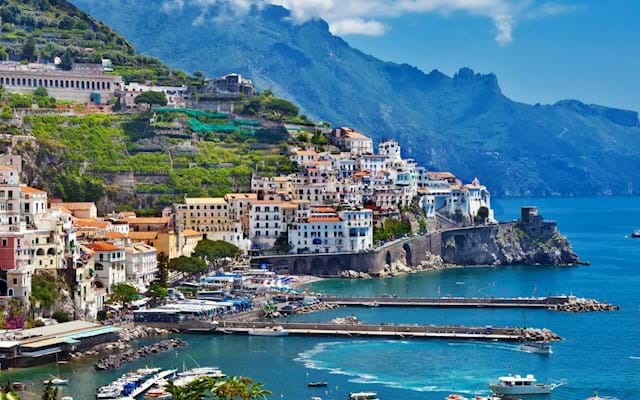 The Amalfi Coast, Italy is a 50-kilometer stretch of coast that runs along the southern tip of the Sorrentine Peninsula. It is an extremely popular holiday destination, with its rugged shoreline, pastel-colored fishing villages, and sheer cliffs. The coastal road connects Salerno and Sorrento, which are located on the cliffside. After your flight lands in Italy, make sure to spend a few days driving the scenic coast road.

The pastel-colored houses of Positano perched on the cliffs are the epitome of this picturesque Amalfi Coast village, but the town also has its fair share of tourist crowds. If you’re looking for a more sedate setting, try Ravello, perched atop a hill about one thousand feet above sea level. You’ll find dreamy villas and gardens, and a romantic sense of faded glory here.

While Positano is an idyllic little town, it’s not for the faint of heart. This cliff-top village has a reputation for being quite steep and not very accessible to everyone. There are many stairs to climb to reach its pristine beaches and famous 12th-century cathedral. It is not a destination for people with limited mobility or those who don’t mind a little hiking.

Parking is a problem in Positano. There aren’t many hotels in the town, so you’ll have to park your car in a garage for about 30 euros. To reserve a parking space, make sure to call a few days ahead of time. You’ll want to avoid driving into Positano in the summertime, when the garages get crowded. Before leaving, remember to check your car for new scratches.

The picturesque town of Positano has long been a favorite of artists seeking inspiration. Richard Wagner, DH Lawrence, and Gore Vidal were all inspired by Positano. In fact, the quaint seaside village is a perfect base for an Amalfi Coast vacation. There are several other picturesque villages nearby. Just make sure you have time to visit all of them.

In the 1980s, the producer of the renowned TV show, Lifestyles of the Rich and Famous, visited Positano. He was later married to the mayor of the town. A year earlier, the show’s director fell in love with the town. Positano’s narrow streets give the impression of precious stone. The UNESCO World Heritage site is made up of a collection of pastel-colored houses tumbling down a hillside, all surrounded by the sea.

A stroll along the Amalfi Coast’s steep, winding streets offers panoramic views of the Mediterranean Sea and craggy mountains. You can even see the medieval pirate watchtowers and colorful villages along the way. The town was so beautiful that it was a frequent shooting location in movies and video games, including the 1957 Humphrey Bogart film Beat the Devil.

Walking around Positano’s streets is a must. You’ll be walking for a long time, as there is only one main road. But once you’re done, your legs will be aching. If you’re a fitness freak, you can opt for hiking tours, which take you up the hillside and back down to town. For more challenging routes, you can try a hike around the area.

Another place to enjoy the stunning view is to eat. The locals in Positano don’t mind people watching, but the restaurants are usually crowded and expensive. However, there’s plenty to do and see in Positano. You’ll have to find the right place to enjoy your vacation and take in the sights and sounds. When you’re on a trip to Positano, be sure to pack some sunscreen.

The Amalfi Coast town of Positano is an epitome of Italian style and is known for its pastel-colored homes. The town was founded by the Greek god of the sea, Poseidon, as a declaration of love to his beloved Pasitea. The town is a little fishing village that has grown up vertically, following the steep incline of the mountains. While you stroll down the narrow streets of Positano, you’ll notice that the houses are brightly painted, giving the illusion of precious stone.

One of the main attractions of Positano is the narrow cobbled streets and colorful houses that line the steep mountainside. Unlike other towns, this town has no traffic, and it’s incredibly easy to see why. You’ll be rewarded with amazing views of the Mediterranean and Medieval Saracen towers dotting the town’s cliffside. The town also receives a seasonal influx of tourists, which adds to its charm.

If you’d like to see the colorful homes of Positano from the sea, take advantage of the town’s “sea taxi” service, which departs from the Marina Grande beach. These services transport tourists to the secluded bays, which can only be reached by boat. You can sample some of the town’s famous seafood at Laurito’s Da Adolfo restaurant.

The main beach in Positano is a popular destination for visitors. A long stretch of sand, lined with colorful umbrellas, stretches east for 300 meters. A lido manages part of the beach, where sun beds and showers are available for rent. The beach is also home to a fine restaurant. To the east, the beach ends at a rocky terrace called the ‘Scogliera.’ At night, this beach becomes a hotspot for the lively music club, Music on the Rocks.

The main beach is 300 meters long and backed by cliffs surrounded by cypress trees. A string of restaurants and a famous discotheque line the shore. This beach is where the social life of Positano revolves. Two bathing establishments and a free area line the beach, and excursions leave from here for the surrounding towns. A short walk will get you to the beach, where you can enjoy the view of the town’s skyline and the Li Galli Islands.

If you’d like to swim a little further, Positano’s long beach is a great place to do so. There are several private beach clubs that have loungers and umbrellas, changing tents, showers, and restrooms. You can reserve a lounge chair from the Da Adolfo restaurant and enjoy the ocean from a luxurious chair for only EUR7 a day. You can also choose to lounge on a white chair at the Tre Ville beach club, which has a trendy atmosphere and an excellent view of the town.

The Amalfi Coast is a 50-kilometer stretch of coastline on the southern tip of the Sorrentine Peninsula. It is a popular holiday destination, renowned for its rugged shoreline and sheer cliffs, as well as pastel-colored fishing villages. This stretch of coastline links Salerno and Sorrento, which sit cliffside. Coastal roads connect the two towns. Ravello is a small, charming cliffside village with a spectacular view.

The spiritual heart of Ravello is its 13th century cathedral, the Duomo. This structure combines Romanesque and Baroque styles with Moorish and Byzantine influences. It features spiraled columns, a central nave supported by lions, and sculpted white marble. There is also an excellent museum on the site, with mosaics and marble busts. The city’s musical history is also celebrated in the area.

A visit to Ravello will take you back in time. This town was declared the “City of Music” by UNESCO in 1997. Today, it’s an important tourist destination and has a population of over two thousand. In its heyday, it was a major town of the Amalfi Republic. Famous writers and artists have visited the town over the centuries, including Leonard Bernstein and Virginia Woolf.

Another beautiful villa in the area is the Villa Cimbrone. This villa was saved from decay by English nobleman Sir Beckett. The villa is home to some of the country’s most famous tourists. The Villa was formerly a farmhouse, but was renovated by Lord William Beckett in 1904. Today it is a hotel, but you can still see its beautiful interior and enjoy the views. Aside from the villa, it is also home to beautiful gardens with rare botanical species and statues.

There are several ways to reach the island of Capri, Amalfi Coast, including taking a hydrofoil from Sorrento or Naples. You can also take a ferry from the bay of Naples. While the ferry will take about 80 minutes, you can also take a bus that stops at both ports. Taxis depart from Anacapri. The fare is around EUR15. It is also possible to take a taxi, which will cost about EUR10.

To explore the island of Capri, take a boat tour. There are plenty of private and shared boat tours available to take you to some of the most beautiful parts of the island. You can also hike to the top of Mount Aeolian, the highest point on Capri. While you’re there, take a look at the ruins of Imperial Roman villas. You’ll also be treated to a breathtaking view of the town.

Once in Positano, you can explore the town center. Explore the Duo of Amalfi or stop for a traditional pastry at Pansa. Before you board a boat to return to Capri, consider booking a guided tour. A private tour is the best way to see the coast and explore its historical highlights. In addition to a private tour, a private driver will pick you up in Sorrento and take you along the coastline. Your guide will also share some of the history of the island.